Delving into the life of President Nixon.

Over the last week, I have been reading a little bit into the life of President Nixon. I have always been fascinated by his presidency, maybe just the fact that he was almost impeached. I love policial chaos. Like I never want to be part of it, but sitting on the outside and looking in while it all burns and I roast a marshmallow is totally fine with me.

One of the books I got in my most recent trip to the library was The Last of the President’s Men by Bob Woodward. 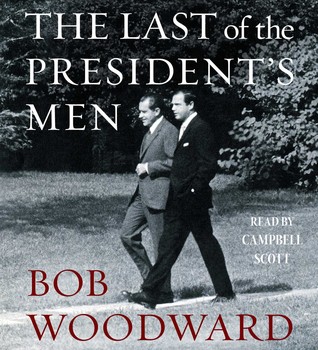 It tells of the political career of Alexander Butterfield who was an aide to President Nixon, his go-to guy. His office was literally steps from the oval office.

Let me just say up front, while I am fascinated by the political chaos that Nixon created, I honestly know very little about it. Like sure there was spying and stuff and deep throat but like other than that, I don’t really know anything. It took me years just to learn that Watergate was just the name of the building where the crimes took place and I’m only like 90% sure I’m getting that right. Becky, are you reading this? You’re into Nixon stuff right? I think Paul mentioned that. Is this correct? I really shouldn’t be writing this without knowing my facts but whatever that’s how we roll.

So onto the book! I had no expectations at all because I literally just saw the title on the spine, read that it was about Nixon and was like “done” and added it to my pile at the library. Sometimes you’ve just got to jump in head first!

I liked the feel of this book. The writing style. It was a look into the personality of Nixon in addition to what Butterfield experienced while he was working in the Whitehouse. I liked to see that. It was nice. It did take a little bit to get into the book, but people who love the Watergate scandal would be totally hooked from the start I’d think. At a few places, I almost stopped reading because I was getting bored, but I’m glad I stuck it out! There was some major drama-rama in there that I was happy to read about because I’m a horrible person and I love gossip. OK? FINE I admit it! I love gossip!!! And this book was political gossip. Which isn’t everyone’s thing, but I could eat it up.

So yes, that’s my view. 4/5 stars. I don’t know why. That’s just how I’m feeling today. Yesterday it was 3.5 so it should count itself lucky that I made a post yesterday and decided to write this up this morning instead of last night.

Have you read this book? Or something like it? Have I gotten all my Nixon facts wrong because I didn’t even bother to look up anything before starting to type this out? Let me know in the comments.

14 thoughts on “The Last of the President’s Men”