The beep test, pacer test, suicides, stairs – whatever you call it, it’s a horrible experience.

Do you know of this test in school? I saw a funny on Pinterest (again!) and was reminded of a horrible experience I had while in grade 9 with a variation of it. But there’s apparently a happy little slice of society that has no idea what this test is! 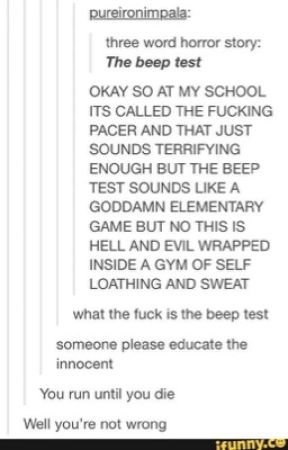 Can you read all of this one? Cos it’s the best!

Okies, so my experience:

Like I said, it was grade 9. I hated my gym class, but it was needed to graduate so I took it the first year and that was the end of that. Thankfully, it was also the last period of the day so I went straight from gym class to home and I didn’t have to suffer through the day feeling all sweaty and gross. We were on a split schedule which meant that we had the same 4 classes every day until the end of January, and then 4 new classes the rest of the year, so I had to endure gym every single day. And our teacher was horrible. But that’s not the point!

Ok, so I’ve done suicides (start at one line on the gym floor, go to the next, then come back, then the next line and come back, etc etc until you’ve covered the whole gym) and the regular beep test, but the worst out of all the variations is the one on the stairs.

The tape starts off slow: up one step, down one step, up two, down two. Just like that massive image above, the lady cheerfully says “end of level one” or whatever.

Then she gets faster and faster! And then it’s up three steps, down three steps, up three, down two, up one, down three, it’s like she’s messing with your mind! You spend about 10-15 minutes following this cheerful lady’s voice until you either have to stop or you’ve reached the end of her instructions.

The worst part isn’t the aching muscles or the exhaustion, at least not for me! My teacher put this activity on a day when we were doing circuits so after you were done, you rotated to a different activity. I was changing activities and had to go up the stairs to the second level of the gym to some other machines. As I was going up the stairs, a group of students were about halfway through this test and the lady was like “up three stairs” and then she said “down three stairs” and my brain was like DOWN!! QUICK BEFORE THE NEXT INSTRUCTION!! And my one foot WENT DOWN! As my brain was still saying to the other to walk up, and I legit fell on the stairs because of this lame stupid test.

Anyways, so that’s my horror story. I also quite love the Bluestone 42 episode where the whole group does the beep test and Mac and Rocket are cheating at it. I couldn’t find any clips for you, but if you want to search it out, it’s season 3 episode 3. But if you’re going to watch it, ya just need to watch the whole series. It’s only 3 seasons long and it’s a BBC show which means like 6-8 episodes in a season. You can totally smash it out in a day if you’re committed 😉 hehe

Do you have any beep/pacer/suicides/stair test horror stories? Hit me up in the comments below. I’d love to hear them so I don’t feel so alone in my loathing of this activity.