Ya know, I’ve never really been one to have just one or two favourite places. And more often than not. I have many different ones depending on where I am in the world of my own mental state.

One of my favourite places in Ontario is Georgian Bay. There are amazing hiking trails there and I spent a lot of my childhood running around some campgrounds and lakes in the summers. The church I attended had a property up there so it was easy to be spending around a month every summer up there. 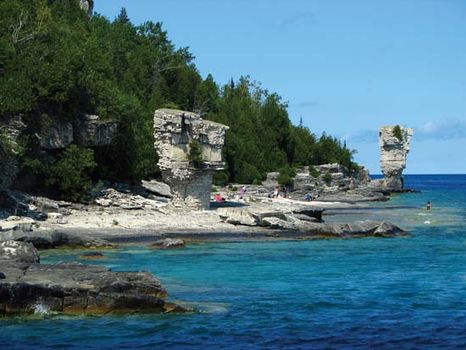 In South Korea, my favourite place was Gyeongbokgung palace. I visited that palace so many times I’ve lost count! It’s beautiful! I’ve gone at least twice every season. When I was younger, my family lived in the country and my favourite place to play with my friends was in a farmer’s field. There was this great old tree that had been dropped close to the edge of the field by a tornado decades before, and we made it like our little clubhouse. It was right behind the pump house at the end of my road and it was close enough to my house that I could hear my parents whistle when they wanted my brother and me to come home (they used a Fox40 and gave a few quick blasts from the front porch, we could basically hear it from anywhere in town).

But, when I first read this prompt, my “favourite place” that came to mind wasn’t an actual place to visit or a place that I get to go anymore right now. I wasn’t going to include it but I think I will anyway. It’s that’s time of night when you’re curled up in bed, way past when you needed to go to sleep but you’re on the phone having a conversation about absolutely nothing important but you don’t want to hang up so you just kind of lay there listening to the other person’s voice talk you into sleep. And the other person knows you’re half sleeping because you’re just saying “mmhmm…..yeah….totally” in response to whatever they are saying but you refuse to admit you’re tired when they comment on it because you’d rather be half asleep but still hearing their voice than actually asleep, so eventually, they just say goodnight and that they are hanging up because they are really just having a conversation with themselves at that point. I love that “place”.

But I don’t want to end on such a vibe, so I also want to include my favourite place in Toronto so far. It’s an art gallery downtown, right on the waterfront. It’s called The Power Plant.

It’s so easy to get to and is always free (which is sometimes a plus, right?). The thing with this art gallery is that it’s a collection of some of the most “out there” art I have ever experienced. It challenges my own perspectives of art and pushes the boundaries of what I think is pleasing to take in. Like, the last time I was there, there was just a mound of dirt in the middle of a room with spices in it. The time before that, just an empty room with a concrete floor and there were lines on the floor the looked like they had been stapled together. It’s weird but calming. I love going whenever they switch up their exhibits just to see what’s new.

Where/what are some of your favourite places?

If you want to read more about my Saturday Questions or want to participate yourself, click here.