It’s been a solid minute and a half since I’ve posted about one of my dreams.

Yesterday, I was reminded of a movie that I used to love called Renaissance Man. 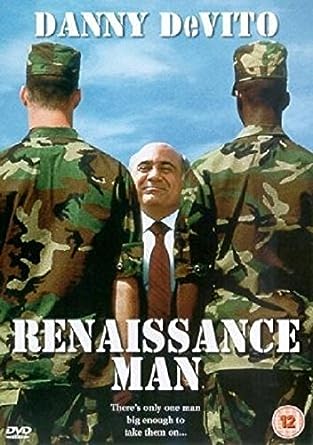 Now, if you haven’t heard of this movie, let me just break it down for you. It’s a classic 90’s comedy – totally cheesy! But Danny DeVito plays with advertising dude who gets fired and the unemployment office sends him to a military base to teach “common sense” to a group of loveable misfits (the double D’s aka dumb as dogshit) so they can pass their basic training. So he teaches them Hamlet, and it’s awesome. Mostly because it has that girl from Clueless, that girl from Sister Act 2 who sings “the love boat”, that guy from everything that I’m always like “oo that guy!” and, of course, Marky Mark.

So I went to bed kind of thinking about this movie, and possibly I’ll find it online and watch it on Monday since it’s a holiday and I’m 95% sure I won’t be working. So I can avoid packing by watching it.

Anyway! My dream. Okies, so just like Danny DeVito, I’ve been asked to be a teacher on a military base. Strange I know, but whatever, I’m still technically a licensed teacher so I guess it’s possible. And I get this cute little kindergarten class (are there kindergarten classes on military bases? Or do the kids just get sent to regular schools? If they stay on base, someone hook me up because now I want to teach there). In the class there is this adorable little girl who will only dress in fatigues and every time I ask her to do anything, she stands at attention, clicks her little shoes together, salutes and screams “MA’AM YES MA’AM!” and then parade marches off to do it. So cute.

Then I woke up, and my brain was kind of going off of that whole military thing and I started to think that it’s almost May so I should probably watch Bluestone 42 again to help with the sadness that is the end of May, and I realized that I passed right by Remembrance Day without crying. This is the first time in seven years that it’s happened. I pre-scheduled my Remembrance Day post, like I always do, because I generally stay offline on that day, usually because I’m a heap of emotions and I like to keep that to myself by shutting everyone out and watching Bluestone 42 (super healthy way of dealing with emotions, I know). Because let’s face it if my mind is going to be in Afghanistan anyways it might as well have a British military comedy to lighten the mood as much as possible – right? And sexy grown-up Neville Longbottom. Win, win.

So it dawned on me, that Remembrance Day came and passed and I didn’t have a mini-breakdown. Yay progress for me! They have been getting smaller and smaller over the last two years which is great, but I’m feeling pretty good about this little victory. That’s pretty awesome. Go me!