It’s been 5 weeks since my last Nail Art post so it’s about time to get it started up again!

Since it has been such a long time, I decided that I wanted to do something special for you guys. But with Valentine’s Day just around the corner (omg how on earth did that happen?!) I thought I better stick to regular polish and save my gel polish for Valentine’s Day.

While perusing on Pinterest, I discovered galaxy nails. They look so pretty don’t ya think? 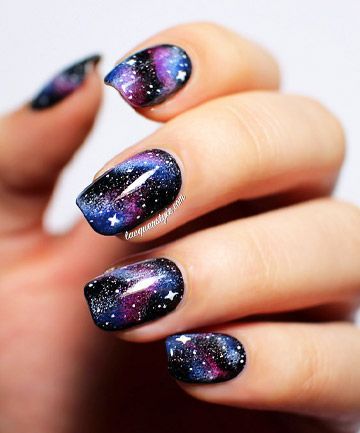 There are loads of step by steps for this design, so I selected one that was easy to read and understand and was in English (that’s kind of important, right?)

So that seemed simple enough. I got started by doing my base coat and then two layers of black polish just to get a really smooth base for my galaxy. Then I set up my nail station to do the rest, thinking I should have been filming it from the start, but then I was all “naw…it’s cool. This is so easy and simple I don’t need to film it for my peeps.”

all set and ready to go

Like always. Ya know…I think I need to change the title of these posts to “Nail Art Failures” because they never seem to work out the way I want them to. But maybe that’s what makes them magic? I’m not sure. But let’s take a little picture walk through my most recent disappointment, shall we?

Yeah…looking pretty gnarly at this point. Only halfway through the process. But I pushed on!

Since I had used both of the little ends I decided just to use the corner for the teal.

Not sure if you can really see this, but I took the time to “smooth” it out with the makeup sponge at this point. I think that means that you just dab the sponge over the polish again to kind of smush it around a little bit more. Maybe if I had done that after each colour it would have turned out better? I don’t know. But that still didn’t really save it. Like at this point I was kind of “oh, yeah, I guess this could possibly work for like a week…”

Then it was time for the stars. It says to use a toothpick but I used a small dotting tool. I should have used the smallest one I had which would have mimicked a toothpick much better, but ya live and ya learn folks.

Yeah…even that couldn’t save it. I tried to “smooth” it with the makeup sponge once more but it wasn’t working. I didn’t even do the other hand. I literally just looked at it and was like “um nope. You suck. You should be ashamed of yourself. Bad nail polish!” I put everything away, waited a few hours and just took the whole business off.

Such a waste of time and effort.

Tune in again in two weeks to watch me destroy a Valentine’s Day design! Possibly next week I’ll make a poll and you can all vote on which design I should attempt.