Let’s just put it out there right now, this is just snooping really, not actual stalking. I’m not going to be like Jack McFarlane and sit outside of Kevin Bacon’s apartment with binoculars and then get a job as his assistant just to be close to him (ps: do you know how hard it is to find a picture of Jack in the bushes with his binoculars?! I’m so disappointed internet.) 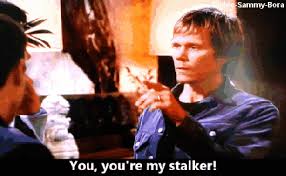 My parents live in this cute little town in the middle of Huron county. Now there are lots of cute little towns out there, and I’m not saying theirs is the best or the cutest, but I am saying it’s a pretty great place to live. They live across the street from two really nice older couples, but today we are going to focus on just one of them.

When I first visited my parents at their new house, they pointed out who lived where, and the one older gentleman, we’ll call him Al for this post, I liked to call crazy-Al. Sure, not the nicest name, but I was 23 and kind of mean to people. It was the friends I kept. I dropped them, I’m a better person now.

Anyways, Al is a sweetheart. He’s short just like my dad, and actually like the same age as my dad, has the greatest stories from his childhood (poured glue in his teacher’s piano, put some sort of non-lethal shells in the schoolhouse fire and had them explode, drove around drinking beer in the middle of winter and then got pulled over by the cops in the snow, the cops just helped them put chains on his tires, took a beer and cheered them off to safe driving ahhh the good old days), had the cutest old Scottish terrier. He’s a stand-up guy. We would chat when he came into Tim Horton’s all the time. Still do, actually.

When I was visiting my parents in the summer, I was informed that Al’s dog had to be put down. This wasn’t a surprise, he was old and had lots of health problems. But what was a surprise is that they got a new puppy! Did I tell you about this?! I literally sat in our front room beside the full bay window reading for days hoping to see this little pupper. DAYS! Eventually, my mom saw Al outside one evening, stood on the porch and yelled across the street that I wanted to meet the pup. And meet the pup I did!! He is the cutest little thing in the entire world and I almost tried to just walk away with him! Almost. I didn’t. Remember I’m a better person now. I got to hold him and snuggle him and he gave me kisses and when he barks he sounds like a little squeaky toy and he was so small he could fit in my purse. That was in July. Now it’s October and I literally did the exact same thing! I was notified by my father that Al had shaved his beard. With his beard, Al looks like Santa. It was a spectacular beard! And he apparently had had it for 35 years. Thirty-five fudge muffin years! That’s five years longer than I have been out in the world breathing!

Obviously, the creeper in me perked right up! So I would casually spend a little bit more time than normal while walking passed the front window in the house, I took a few hours on Saturday night, went to Tim Hortons with a book and hoped he would be there for his evening tea and muffin. No dice! Not a single glimpse of beardless Al!

I feel like you are Will…judging me for my love of Chris Evans and Ralph Fiennes and creeping on my neighbours. Keep that sass to yourself guys! *provided via google*

Then it happened!! Sunday he was outside putting in a screen on a window since he had taken out his AC unit for the winter. But I didn’t get a good look. Then I was reading and I saw him drive away in his car and I caught just the smallest flash of a beard-free face.

I guess I will have to wait until Christmas to try again. MAYBE I’ll just bake some cookies and go over and say “Merry Christmas Al and Mrs Al!” I won’t be hanging up my lazy stalker title just yet.