The elves in Harry Potter play a big role. Not only in the interactions with the main characters but also with things that you would never really consider.

The most popular elf in Harry Potter has to be Dobby. He is prominent in the books and the movies. You instantly fall in love with him and, unless you are a heartless monster, are pretty much crushed when he dies. He unwavering loyalty to Harry is heartwarming and he offers lots of laughs while reading the book. He is quite the character. 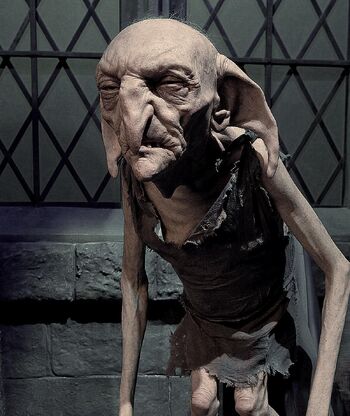 Next of course is Kreacher. Kreacher was once Sirius Black’s house elf, but when Sirius died, his service was transferred to Harry. At first, he was very resistant to it, and in the movies, you can see the internal struggle that Kreacher has when he has to comply with an order from Harry.  However, what you don’t get to see in the movies is that he eventually learns to respect Harry. Harry shows him the respect that he never got from Sirius, and Kreacher slowly changes his alliances from the Black’s to Harry. He even starts to respect Hermione, which is a huge accomplishment if you recognise how much hate he has for her at the start. My favourite line from him is in book 7 when he is hitting Mungdungus over the gead with a frying pan, “perhaps one more master, for luck?” Haha!

There is another elf which is left out of the movies entirely – Winky. Winky is such a character and it’s a shame that she wasn’t included in the movies. She first appears during The Goblet of Fire, as the house-elf to Minister Fudge. She is linked to chaos and revolt at the quidditch world finals when the dark mark first appears in the sky and the minister sets her free from his household. She is eventually taken on at Hogwarts, with a little help from Dobby, and then turns to drink and basically turns into a lush. Drunk Winky is a sad pathetic soul, but the care that Dobby gives her is so touching. Of course, one of the main things that people have an issue with about the house elves would be their treatment as basically slaves within houses – and especially within Hogwarts. In the books, Hermione starts and organisation to fight for elf rights (S.P.E.W – the society for the protection of elvish welfare) which was completely left out of the movies. When you read the books, the elves are written to be totally content in working for no money, and actually almost shun Dobby since he works for a wage when he is hired at Hogwarts. They can’t understand why he would embarrass their race by accepting payment for working. So I’m not sure if I can side with Hermione in working for their betterment if they are genuinely happy the way things are. Maybe they truly are happy in their situation in life?